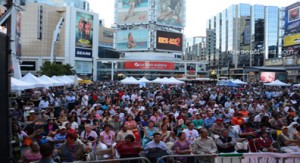 News East West
TORONTO: Top Canadian leaders, including ministers, MPs, MPPs and mayors, will join the Indo-Canadian community in celebrating India’s 69th Independence Day at Yonge and Dundas Square in downtown Toronto on Sunday, August 16.
The biggest event of the community draws thousands of people to the colourful parade and subsequent cultural performances showcasing India’s diversity in dance, music and culture.
Toronto singer Shirsha Chakaroborty will be the lead performer this year.
Apart the colourfully decorated rickshaws, another unique feature of the India Day parade this year will be a 12-member military band led by Lt Col (Hon) Hari Panday. Panday is the only corporate honcho of Indian origin in Canada who dons the military uniform.
The day-long celebrations will begin with the singing of the National Anthem and patriotic songs. It will be followed by the downtown grand parade comprising VIPs and contingents of different Indian states.
After the parade winds up back at Yonge and Dundas Square, the high-voltage cultural show will unfold.
About three dozen cultural troupes and individual performances will showcase India’s rich and diverse cultural heritage non-stop till 8pm.
Over the years, Indian cuisine at the India Day celebrations has become a big draw for families. This year too, more than two dozen food vendors will treat visitors to an array of Indian delicacies Ã¢â‚¬â€œ idli, dosa, chat papri, biryani, tandoori and other ethnic dishes. Ethnic Indian products will also be on sale at the venue.
There will be prizes and certificates for the largest and the most ethnic among state contingents.
Yonge Dundas Square can accommodate up to 26 vendors with several sponsorship opportunities. Vendors looking for a booth and those wishing to join cultural performances or register for the parade can contact info@panoramaindia.org.
ICICI Bank will be the lead sponsor of this year’s India Day Festival.
India Day Festival at Yonge Dundas Square 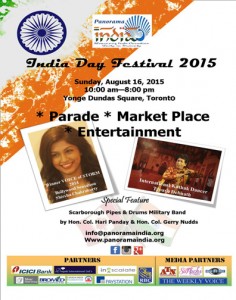 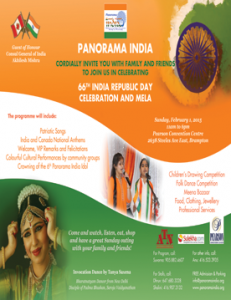 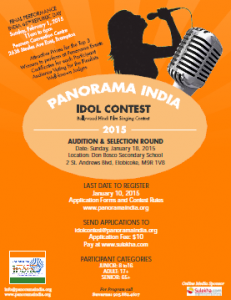 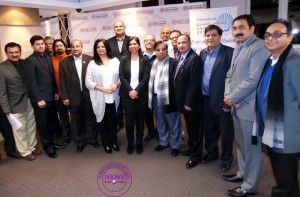 TORONTO: Panorama India, which is an independent umbrella organization of various cutural and social bodies of Indo-Canadians, has announced some brand-new initiatives to enlarge its imprint in the New Year, according to its chief Anu Srivastava.
Recognition of Ind0-Canadian organizations and their leaders at the major Panorama India events is one such initiative in the New Year.
Srivastava says she and her fellow board members Ã¢â‚¬Å“intend to lead Panorama India to the next level and work with dedication and sincerity in meeting its objectives,Ã¢â‚¬â„¢Ã¢â‚¬â„¢ in the New Year..
Giving out details of various past and future activities at the just concluded annual general meeting, she said Panorama India would keep up its critical role in furthering Indo-Canada relations by showcasing the Indian diasporaÃ¢â‚¬â„¢s diversity and achievements in Canada by organizing various events.
Among the major events organized by Panorama India are the Indian Independence Day parade, the Republic Day celebrations and Diwali celebrations at QueenÃ¢â‚¬â„¢s Park.
Looking at the accomplishments of the premier Indian organization in the year gone by, Anu Srivastava, who took over as Panorama India chairperson eight months ago, said, Ã¢â‚¬Å“As we look back upon 2014 it certainly has been a year of challenges, changes, transition and yet some of our biggest achievements too.
Ã¢â‚¬Å“Republic Day celebrations was on February 2nd and Panorama Idol was very successful with record number of participants. I would like to highlight that we were fortunate to honour the great accomplishments and PBD Award of our prominent community leader and philanthropist Vasu Chanchalani, sadly, he is no longer with us.Ã¢â‚¬â„¢Ã¢â‚¬â„¢
She said that in spite of the challenging transition eight months ago Panorama India organized India Day on August 2 at Mel Lastman Square. Ã¢â‚¬Å“This was perhaps the most successful India Day which had an all-inclusive appeal with the maximum number of community representation, dignitary gathering and vendor stalls.Ã¢â‚¬â„¢Ã¢â‚¬â„¢
About Diwali celebrations at QueenÃ¢â‚¬â„¢s Park with the Premier on Oct 8, she thanked IndiaÃ¢â‚¬â„¢s Ã¢â‚¬Å“most ardent supporter Premier Kathleen WynneÃ¢â‚¬Â¦ for playing an integral role in shaping OntarioÃ¢â‚¬â„¢s racial and cultural diversity.Ã¢â‚¬â„¢Ã¢â‚¬â„¢ 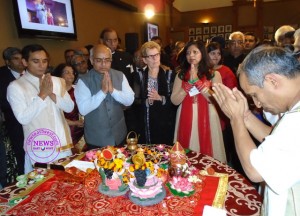 Speaking about the New Year, she announced that Panorama India is introducing Ã¢â‚¬Å“a brand new initiative to host and celebrate the recognitions of the community organizations and their leaders. This will be held for the first time on February 1, 2015, at India Republic Day.Ã¢â‚¬â„¢Ã¢â‚¬â„¢
HSBC is likely to Panorama IndiaÃ¢â‚¬â„¢s lead sponsor for India Republic Day celebrations. The bank will sponsor the community reception and recognition of one community organization for its services.
Ã¢â‚¬Å“Further Panorama India has re-initiated sponsorship discussions with ICICI Bank and State Bank of India which had been put on hold for almost 2 years. And we continue to work with CIBC for their ongoing support,Ã¢â‚¬â„¢Ã¢â‚¬â„¢ Anu Srivastva said. 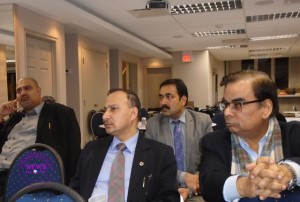 Ã‚Â
ICCC president D.P.Jain and Naval Bajaj at Panorama India AGM
She said, Ã¢â‚¬Å“Our goal is to build partnerships and provide a platform where diverse Indo-Canadians can showcase their talent and bridge Indo-Canadian relations through celebration of culture.Ã¢â‚¬â„¢Ã¢â‚¬â„¢
According to Srivastava, Ã¢â‚¬Å“During the past four months Panorama India has built relations with several other organizations like the Canada-India Foundation, the Indo Canada Chamber of Commerce, the Canada-India Friendship Group, the Rajasthan Association of North America (RANA), the Institute of Chartered Accountants of India, Web Malayalee, Natraj Gujarat Youth, the Agarwals Based in Canada, the Uttarakhand Association, the UPICA, the Telangana Association and many other socio-cultural organizations.Ã¢â‚¬â„¢Ã¢â‚¬â„¢