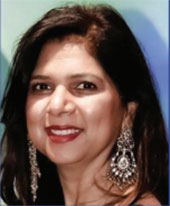 Anu Srivastava is a community leader, finance professional, entrepreneur and philanthropist. As the CEO of ARRA Arts and through her many leadership roles, she has contributed immensely to bridging the Indo-Canadian bi-lateral relations and further ensured that the Indian diaspora have the opportunity to celebrate the rich cultural diversity of India. Anu has also passionately volunteered as Chair & Committee Member in Trillium Health Partners to raise critical funds for the health care field.

Anu has worked tirelessly to take Panorama India to new heights with remarkable success. Under her leadership, the following initiatives were accomplished :